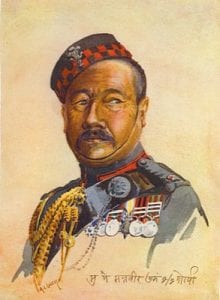 The 2nd Goorkhas was an infantry regiment of the British Indian Army before being transferred to the British Army on India’s independence in 1947.  At that time the 4th Battalion joined the Indian Army as the 5th Battalion, 8th Gurkha Rifles (Sirmoor Rifles), where it exists to this day.

As part of the British Army, the Regiment served in Malaya, Hong Kong, the UK, Brunei and many other locations worldwide until 1994 when it was amalgamated with the other three British Army Gurkha infantry Regiments to form the Royal Gurkha Rifles.

The Sirmoor Rifles Association is for former officers, NCOs and soldiers of the 2nd Goorkhas.  More details about the Association can be found by clicking on the tab in the menu above.

Please note that access to the Secure Pages is restricted to members of the Sirmoor Rifles Association with an ID/password.  If you need access or have forgotten your password then please use the ‘contact us’ form on the menu above to get in touch.

History of the Regiment

1825 The Superintendent of Dehra Dun (a role that combined the responsibilities of district officer and magistrate) was the Honourable Frederick John Shore. He was a remarkably energetic man and in his letters he mentions that in January 1825 he was 'about his labours in the Dehra district of surveying, road-making and opening out the Hardwar, Kansrao and Mohan Passes at which he employed 700-800 convicts under guards of the Sirmoor Battalion.'

The Honourable Frederick Shore in about 1820.  His father, Lord Teignmouth, had been Governor-General of Bengal from 1793-1798.  Frederick was killed at the age of 37 in 1827 at the 'storming of a Robber Fort in India'.