As the temperature rises to the mid-thirties (36 degrees today – as I write), and the humidity makes daily life a sticky affair, I thought Sirmoorees might appreciate a further sitrep from what some may imagine – from UK media reports – to be this ‘bedevilled archipelago’ (the territory of Hong Kong comprises 263 islands). Some may also be pleasantly surprised to hear that we have been leading a very normal life compared to those in many other countries, and are enjoying the freedom that our relative success in containing Covid allows. Schools have been open for the last few months, bars and Restaurants are open (albeit limited to six at a table if fully vaccinated) and gyms, golf courses and all other recreational facilities have also been open for the last few months. Pleasure boats ply their way to Lamma Island, Po Toi and sandy beaches elsewhere, and the more energetic of us explore the hiking trails as never before (albeit with a plentiful supply of water – a hiker died from heat exhaustion on Cloudy Hill only last weekend!).

Hong Kong’s test and trace approach is an undoubted success, and with a mere 11,866 cases and 28 deaths per million of the population, it is only surprising that under the new rules for entry into the UK which came into force on 17th May – Whitehall still classifies Hong Kong as being on the ‘Amber List’. This requires us to self-isolate for 10 days on arrival in the UK. Portugal, on the other hand with 845,470 cases and 1,673 deaths per million is on the ‘Green List’ requiring no self-isolation. It is hard to avoid the conclusion that ‘other factors’ might have played a part in this categorisation as far as Hong Kong is concerned.

Locally we have become a victim of our own success in containing the virus, with many of the local population seeing little merit in being ‘jabbed’. So far only 18 % of the population have been vaccinated – despite Hong Kong having more than enough of Pfizer-BioNTech, AstraZenaca and Sinopharm ordered to more than cover the entire population of 7.5 million twice over. These vaccines are freely available to everyone over 18 and you can choose which brand you prefer. It is a hugely efficient system as you would expect from Hong Kong, and Griselda and I had our vaccinations in March/April. As a result of the slow take up, instead of building up herd immunity by vaccination (as England is doing so well) we adhere to a test and trace system that sends all those likely to have been in contact with an infected person into 3 weeks mandatory quarantine. We therefore spend a lot of time thinking very carefully where we go and whom we associate with – our greatest fear is being dragged off to Penny Bay – which is the grim custom built camp on Lantao, where anyone who has been in contact with an infected person is taken! A 90 square foot room – not allowed to open the windows or door – and food provided by the government!

So far from fearing a knock on the door from those responsible for enforcing the National Security Law (NSL), it is the fear of Penny Bay that excites us the most!

While the application of the NSL causes understandable apprehension amongst the pan-democrats, it has certainly resulted in a more stable and confident Hong Kong – with a growth in IPOs and the Hang Seng holding up remarkably well. The economy showed a 7.8% increase over Q1 over last year.

I must confess that most of us were not overly surprised at Beijing imposing their own security legislation on Hong Kong. Hong Kong was just about the only jurisdiction not to have any national security legislation prior to 2020 – although it was provided for in the Joint Declaration. Given the horrendous level of violence on the streets for 9 long months, it was only a matter of time before such legislation was introduced.

While it is true that the NSL requires ‘patriots’ to serve in the civil service and those that stand for election or public office to ‘swear to uphold the Basic Law and pledge allegiance to the city’, this is not a dissimilar requirement to many ‘democracies’. Sirmoorees may have read about the convictions of nine prominent ‘activists’ for organising and taking part in an unlawful assembly in 2019, but what might not be quite so well known is that these prosecutions were made under the colonial era ‘Public Order Ordinance’ – not the NSL.

The Western media maintain there is no evidence of American funding for supporting the activists in Hong Kong – but it is all a matter of public record – if one chooses to look. There is clear evidence that much of the considerable funding support for the 2019 riots came from the National Endowment for Democracy, one of many sources of funding that the CIA has at its disposal. As to the future – the ‘Strategic Competition Act of 2021’ recently passed by the US Senate, provides US$ 10 million under ‘Authorisation of Appropriations for Promotion of Democracy in Hong Kong’ in 2022. In the view of many who are familiar with China – containment would be better achieved by engagement – albeit while holding true to one’s core values.

It is educational viewing the ‘mis-reporting’ in the Western media. We are used to the propaganda that emanates from Beijing, but it has been very disheartening to see events that residents in Hong Kong have lived through in 2019 and afterwards, reported so selectively and with significant ‘spin’ in the West.

‘Because half-a-dozen grasshoppers under a fern make the field ring with their importunate chink, while thousands of great cattle, reposed beneath the shadow of the British oak, chew the cud and are silent, pray do not imagine that those who make the noise are the only inhabitants of the field’. Edmund Burke

We will be back in the UK this Summer and look forward to catching up with our many Sirmooree friends. We hope and pray that by the time we return to Hong Kong at the end of September that England’s outstanding success at vaccinating the population leads to an easing of the (draconian) three weeks quarantine in selected hotels that the HK government demand (other factors at play again?). 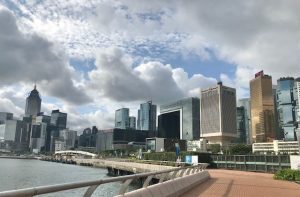 The changing sea/landscape of Victoria Harbour (1) 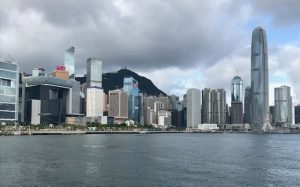 The changing sea/landscape of Victoria Harbour (2) 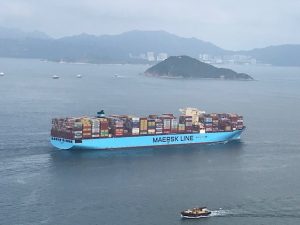 Less container ships and mainly from the Mainland or SE Asia 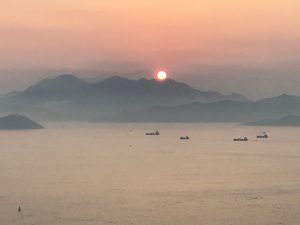 The sun goes down over Lantao 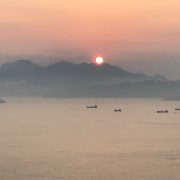 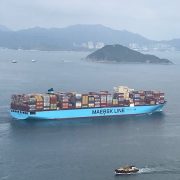 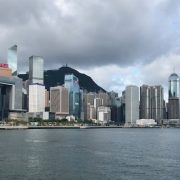 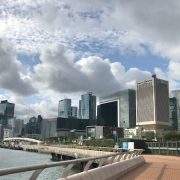