Answer: I don’t know but I’ll certainly give it a try!

Harriet and I have been holed up in Harpenden for the duration of the lockdown. Although it has been a shame not to see friends and family, modern technology has gone some way towards overcoming that, and evening drinks and even dinner parties on Zoom have been a regular feature of our life. As neither of us is categorized as vulnerable we have also been able to get out and about a fair amount in the Hertfordshire countryside, stretching the rules to the limit: I go running and do physical jerks as a proxy for going to the gym; Harriet and I go walking quite frequently; and both of us spending a fair amount of time up on the allotment which (perhaps thanks to Jeremy Corbyn’s residual influence?) seemed to fall outside the scope of government restrictions.

The allotment has been a real boon, as we started a major rebuild of our house in January which quickly turned most of our garden into a good set for a film about the Somme – so it was good to escape. The builders downed tools when lockdown started, fortunately just after they had completed the new roof. Some of them who had not been furloughed quickly came back to do various tasks in order to make a bob or 2, but the majority stayed away until mid-May. Harriet and I had been living in one wing of the house while they messed about with the rest of it, but on their return we decided to move out and give them free rein. My daughter Lucy works as a project manager at the nearby Rothamsted Agricultural Institute, and through her we got a very flexible, good-value let of a 3-bedroom flat in Rothamsted Manor – photo attached! It is delightful, full of history stretching back to Tudor times, and occupied only by us and a couple of the Institute’s PhD students in other flats. If we have to stay here until the autumn, which seems very likely, we shall be very happy to do so.  The current building has survived since the 18th century so I don’t think it will fall down for a few more months.

Pandemic constraints aside, the rest of our lives life continues in a strangely normal fashion. My other daughter Chloe retired from being an opera singer a couple of years ago, and now runs a craft design business. Both daughters are married and we have (so far) one grandchild, Jonny, who has just had his second birthday. Harriet still works part-time for Roehampton University but has not gone there at all since lockdown began. Harriet’s 89-year old mother lives about 500m down the road from us, happy and healthy in her nice little flat. I’ve recently taken over from David Thomas as Chairman of BRANNGO, the Britain-Nepal NGO Network (www.branngo.org.uk) and am very much enjoying building up its plans and activities. We’ve all avoided the virus so things really aren’t too bad. I’ll just keep quaffing the Lagavulin and keep my fingers crossed that it passes us by. 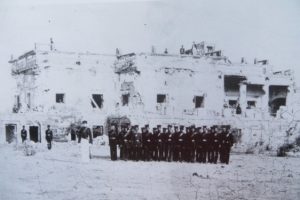 (Above) Our house after the builders had been at it for a couple
of months and (below) our temporary new home. 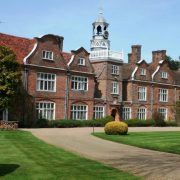