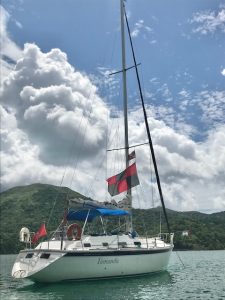 I have been asked to record the exploits of the Far East Flotilla of the Sirmoor Yacht Squadron (SYS), following the sad parting with our yacht ‘Tamandu’ in early July. The ‘Flotilla’ referred to in this article is by definition of a very singular nature! ‘Tamandu’ is a 38 foot Westerly Ocean Ranger constructed in Southampton in 1994. Her first owners had christened her ‘Baringo’ after a lake in Kenya that they often visited, but we decided to re-christen her ‘Tamandu’, in memory of Bhanbhagta’s gallantry during B Company 3/2GR’s seizure of Snowdon East in the Arakan in 1945.

Along with other other nautically minded Sirmoorees, we had much enjoyed sailing the Nuffield Trust funded Services boat ‘White Dragon’ (run aground by a ‘matelot’ on Hainan Island) and the Sail Training Yacht ‘East Wind’ (lost in a typhoon returning from the Philippines under command of an HQBF Staff Officer) in Hong Kong in earlier years. As a result we were keen to sail on our return to Hong Kong in 1997. We therefore acquired ‘Tamandu’ twenty years ago, with a view to using her, as Griselda puts it, as our ‘country cottage’. And she has been a marvellous escape from the urban confinement of Hong Kong with many blissful days and weeks spent sailing the waters of the Sai Kung Peninsula, Long Harbour and Double Haven. Given the pollution resulting from the development of the Pearl River Estuary – what is now called the ‘Greater Bay Area’ – we decided to moor her at Hebe Haven rather than the Royal Hong Kong Yacht Club (the Club still retains the ‘Royal’ in its English rendition). Therefore we joined the Hebe Haven Yacht Club on Hiram’s Highway – well located for sailing out into Mirs Bay, and among other destinations re-visiting the favourite anchorages frequented by ‘Jaldevi’ in years gone by. We have anchored in Governor’s Bay, Crescent Island and spent many a happy night sipping a dry martini and waking with the dawn chorus to see the rolling hills of the Tolo Peninsula. Not a sign of urban Hong Kong and the bustle and lights of the new container port of Yan Tiang (to the east of Sha Tau Kok) hidden by the hills of Kat O Chau (a section base on Border Operations). The Lavender girls and some of our granddaughters have all had enormous fun on her over the years, and we have also had ‘guest Sirmoorees’ on the helm – when Bruce and Carol Jackman, and Peter and Annie Duffell visited Hong Kong. Rachel Duffell and Mekail have also livened up our nautical escapades from time to time – as has Chris Bance (an Honorary Sirmooree by virtue of Cynthia Tuker being his Godmother).

We have periodically sailed into and anchored in Long Harbour, and landed at Ward Haven and Gurkha Haven to cast an eye over current developments and relive happy times. Ward Haven is very well looked after by Swires and available for use by their Main Board – although they seem to use it sparingly – which is a shame. Gurkha Haven had previously fallen into a state of disrepair, but on our most recent visit was undergoing substantial, if unsophisticated, redevelopment, including a modest extension to the building and establishing terraces for growing vegetables. 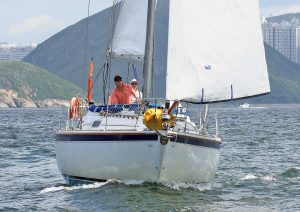 We have enjoyed some very encouraging encounters with nature over the years from seeing two pink dolphins in Hebe Haven during ‘Tamandu’s sea trials, to having a Nurse shark and a Black Tip shark, make us think twice about an evening swim when anchored in Camp Cove, off Kat O Chau (although both are very timid and seldom attack humans)! The Black Tip shark appeared in October 2018 – very late in the year for sharks – but encouragingly there has not been an actual shark attack in Hong Kong since the mid 1990s.

While we have not been regular racers ‘ around the cans’ – ‘Tamandu’ has raced under SYS colours from time to time – notably in the Around the Island Race, the Macao Race (2nd place in 2005) , and the Four Peaks Race. We also competed in a very hairy ‘Cruiser Owner’s Association’ regatta racing from Sai Kung to Middle Island near Aberdeen. The race started with a reef in the Main and the storm jib hoisted in driving rain, straight into wind and with about 10 metres visibility – with a crew of two (Griselda and me) these were not ideal conditions! Incredibly, by the time we reached Cape D’Aigular at the south east corner of Hong Kong Island we found ourselves in a windless ‘hole’ . After two hour’s wallowing, and with the sun approaching the yardarm, we decided to retire, take in the genoa and motor in to Middle Island – for an early Martini. No sooner had we furled in the genoa than a ferocious squall struck – so ferocious that they closed Hong Kong Airport for 3 hours and abandoned a game of rugby in Aberdeen! The effects on the remainder of the fleet, none of whom had furled in their foresails, was chaotic – but they all had crews of 6-7 on board and could just about cope. Griselda and I found ‘Tamandu’ heeling over at 45 degrees with just the Main hoisted! Anyway we survived – but it was a most prescient decision to retire from the race when we did!

The greatest challenge – and our notable successes have been in the Four Peaks Race , which takes place in January / February each year – when the wind is usually strong and the weather chilly to say the least. The combination of running four peaks and sailing through the night make for a demanding 24 hours. In 2008 ‘Tamandu’ won her Division with Chris Gunns coming aboard as a sailor and a very strong runner. Ten years later we assembled a Gurkha-centric crew , which included Rachel Duffell, David Bulbeck (6GR), Colonel Andrew Mills and Peter Smyth (both QGE). This crew largely stayed together for three seasons – we came second in 2018, missed a mark and made poor tactical decisions leading to our retirement in 2019 (!), and came storming back in 2020 with a resounding victory over seven other boats in our Division! ‘Tamandu’s’ name will live on – engraved in the silverware on display in the Aberdeen Boat Club- under whose auspices the race is organised.

It is always better to end any venture on a high note, and with ‘Tamandu’ being 26 years old – there was an ever increasing bill for maintenance. Selling a yacht in Hong Kong is complicated by the shortage of moorings, and so when a fellow member of Hebe Haven Yacht Club expressed an interest it seemed too good an opportunity to miss, as moorings can be passed between club members. And so we handed ‘Tamandu’ over to her new owner at the beginning of July. It was inevitably a rather poignant occasion, but she is passing into good hands. Andy Brown is the Director of Kadoorie Farm and his father was a Royal Engineer who served with Gurkhas in Burma in WWII. He loves the Gurkha connection and will retain the name .

While the Far East Flotilla of the SYS is therefore no more, ‘Tamandu’ will continue to be sighted in Far Eastern waters and many a lantern will swing below decks as runners and sailors recall ‘hills run and passages made’ in the Four Peaks Race. Meantime it is back to the Med for a little chartering! 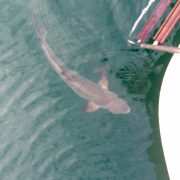 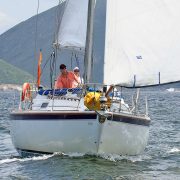 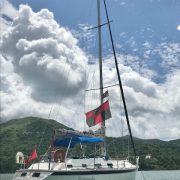 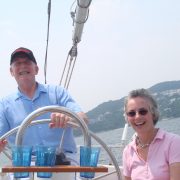