The exact date is unclear but about this time on return from Sitapur (where the Sirmoor Battalion had joined an army under General Nicholls to invade Nepal but were not used against their fellow countrymen) the matter of dress was considered. Eventually the Sirmoor Battalion ‘presented a smart appearance in a dark green coatee with tails looped up, black facings, high shoulder wings, white drill trousers and native shoes. The breast had 5 rows of black and white braid’. Later a green shako was given to them which was subsequently replaced by the Kilmarnock cap. Finally there was ’an enormous expense pouch depended from a black leather cross belt, on front of which was a brass plate with the name of the Corps‘. 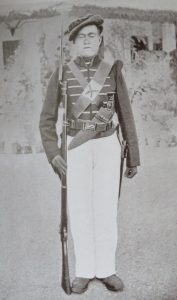 Sirmoor Battalion sepoy ‘in 1817’.  (Frontispiece from Volume 1 of the Regimental History published in 1912, thought to be a photograph of a replica uniform created at about that time).