The Sirmoor Battalion left Dehra Dun to attack dacoits at Koonja, using a battering ram to force entrance into the fort. For this successful action, the Regiment’s first major engagement since being formed in 1815, the Sirmoor Battalion was awarded the honour of wearing a ram’s head on their crest and cross-belt badge.  This historic honour was transferred to the Royal Gurkha Rifles when the 2nd Goorkhas was merged into the new Regiment in 1994, whose officers continue to wear the Ram’s Head on their crossbelts. 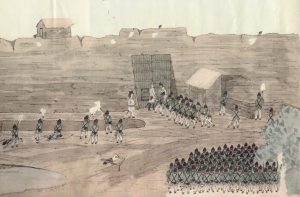 A contemporary sketch of the Battle of Koonja