The Regimental History reports ‘Officers of The Sirmoor Battalion, based in Dehra Dun spent most of their time getting the Corps into shape, or in shikar (hunting); parades were few, drills mostly under the native officers and field days were nil; so it is not to be wondered at that in the long spell of peace after [the battle of] Bhurtpore, we find Captain Young [the Commandant] devoting himself to civil works and the opening up of the district, such as commencing the roads from Dehra to Kalsi and Dehra to Rajpore’. 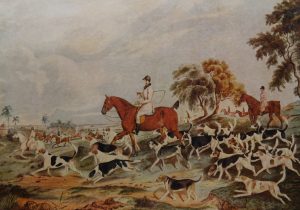 The Dehra Hunt, set up in about 1815 by Frederick Young with an imported pack and maintained by him for some 15 years.  He is riding the grey on the left-hand side of the picture.