On the arrival of the Commander-in-Chief, General Sir Hugh Rose, at Lahore he ordered a parade of all troops at which he presented Her Majesty’s Truncheon to the Regiment. He also made a complimentary speech in which he reviewed the history of the Sirmoor Rifles. The Truncheon had been devised by Colonel Charles Reid, the former Commandant, and sent out to India after being authorised by Queen Victoria to replace the old colours that could no longer be carried since the Sirmoor Rifles had become a rifle regiment – colours of which the Goorkhas were ‘justly fond and proud’. Click here to read a more detailed history of the Colours and Queen’s Truncheon. 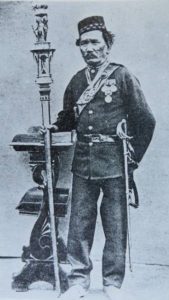 The earliest known photograph of the Queen’s Truncheon, taken in 1865.  It is being held by Subedar Major Indrabeer Lama, Sardar Bahadur, OBI