As a result of reports that the Mohmands and other tribes were moving down from their hills the Field Force (which included the Sirmoor Rifles) based at the foot of the Umballa Pass moved to their respective assembly areas. For the Sirmoor Rifles it was under the Michni Gate of Shabkadr Fort. Offensive action began with the firing of a large gun from the fort followed by an advance to contact where the leading companies of the 3rd Battalion Rifle Brigade and Sirmoor Rifles ‘came into first touch of the enemy‘ and the tribesmen, estimated at 6000, promptly broke and fled pursued by two squadrons of the 7th Hussars and a battery of the Royal Horse Artillery. The regiment’s only casualty was the Adjutant’s horse ‘being shot from under Lieutenant Battye’. 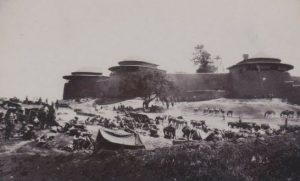