On the North-West Frontier Brigadier General Vaughan, commanding 2nd Infantry Brigade, reported ‘Infantry regiments were then advanced to the lower slopes of the Kiarkote Mountain, viz the 2nd Goorkha Regiment leading in skirmishing order.  When the requisite dispositions were completed this regiment was ordered to advance up the hill, which it did with the greatest spirit.  Lieutenant Colonel H Macpherson VC, in command of the 2nd Goorkhas at the point of Chittabut, relieved me of all anxiety as to that point in our position while the ready and skillful way in which his Regiment hutted [sic] itself attracted the attention of all who saw it.’  Click here to read an account of the campaign. 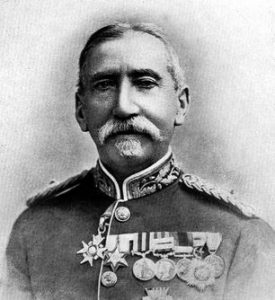