The 2nd Goorkhas departed by sea from Calcutta, the first time the Gurkha soldiers had seen the open sea.  They reached Chittagong on 4 November as part of a force sent to suppress rebels from the Looshai, Howlong and Syloo tribes.  They did not reach their advanced base at Demagiri until 18th November, and did not encounter active hostility from the tribes until January 1872. 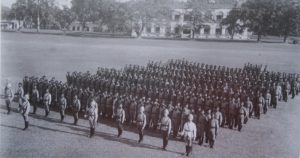