The 2nd Goorkhas had gone to Malta as part of an Expeditionary Force to counter Russian threats to Turkey in the Mediterranean following the end of the Russo-Turkish War.  On this day in 1878 they re-embarked on the SS St Osythe (on which they had sailed out) for Cyprus.  Administrative control of Cyprus had been ceded to Great Britain by the Turks as a quid pro quo for their support against Russia. 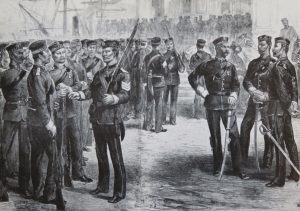 2nd Goorkhas in Cyprus, 1878 (from the Illustrated London News)