During the night the SS Bengal, carrying the Sirmoor Rifles from Cyprus to India, ran aground in the Red Sea off the African coast on the Ras Abooderaj reef near the Zaffirina lighthouse.  The sailing vessel Citadel, which it was towing, caught the Bengal a glancing blow, smashing bulwarks and some boats.  The SS Bengal was pulled off the reef by HMS Iron Duke and had to return to Suez for 8 days of repairs, during which time the Goorkhas had to remain on board. 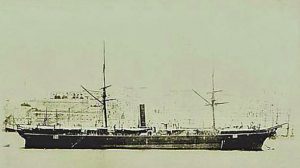 The SS Bengal as a troopship in about 1878.  It was wrecked off Java in 1885 when carrying a cargo of rice from Saigon to Surabaya.