The Battle of Kandahar, the final major action of the 2nd Afghan War, began at 09.00 hrs. The first phase was to capture the village of Sahibdad, where there was fierce resistance. The Commandant of the 2nd Goorkhas, Colonel Battye, was wounded as were many of his Goorkhas. By 10.30 hrs the objective was taken and the infantry pressed on to capture the village of Pir Paimal, which was achieved in a series of rushes, but thousands of the enemy made a stand around 2 guns. A charge by the 92nd Highlanders and 2nd Goorkhas ‘sprang forward with a cheer and went for the guns, and after a sharp hand-to-hand struggle the Afghans broke and fled. This incident in the battle decided the day.’ 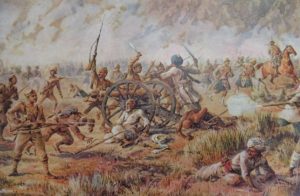 The Battle of Kandahar, showing the seizure of the ‘Kandahar Cannon’

A Rifleman of the 2nd Goorkhas reached one of the guns first, and springing on to it waved his cap, cried out in Hindustani ‘This gun belongs to my Regiment – 2nd Goorkhas! Prince of Wales!‘. He then thrust his cap down the muzzle in order there should be no dispute as to future ownership. Subsequently the gun stood outside the Regimental Quarterguard for over 100 years as a prized trophy of war. The 2nd Goorkhas lost 8 killed and 29 wounded. 649 enemy bodies were buried at Pir Paimal with many more carried off by their comrades.  Click here to read an account of the campaign.