Lieutenant Colonel SE Becher received orders to start planning the recruitment of men for a second Battalion of the Regiment, which eventually came into being under his command on 14th September 1886. Major General George Greaves, commanding the Meerut Division, favoured it being located at Dehra Dun which was already the home of the 1st Battalion.  This was supported by Lieutenant General Sir Frederick Roberts, the Commander in Chief, and endorsed by the Government of India. 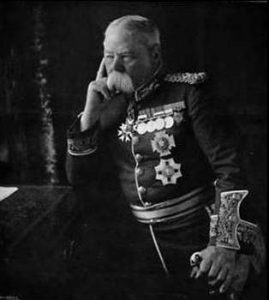 General Greaves – accompanied by his splendid moustache – as a full General circa 1891 in the appointment of Commander in Chief, Bombay Army.