Following the unsuccessful attack on 18th October, 2nd Division was again ordered to occupy Dargai Heights. The attack was led by the 1st Battalion and by 11.00hrs they had worked their way up to the ridge beneath the enemy’s sangars. The Gordon Highlanders and 3rd Sikhs were then ordered to reinforce. At 14.40hrs another attack was launched and despite another devastating outburst of fire from the sangars above an irresistible rush of Highlanders, Sikhs and Goorkhas encouraged those waiting under the cliffs to scramble up to the enemy positions. The position had been taken, but at a cost to the 1st Battalion of 2 British Officers, one Gurkha Officer and 15 Gurkha Other Ranks killed, and 50 wounded.  Fighting alongside the Gordon Highlanders led to a close long-term friendship between the two Regiments. Click here for an account of the campaign including an eyewitness account of the 2nd Goorkhas’ attack. 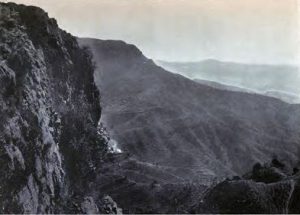 A photo of Dargai Heights.  The narrow ridge at the right-hand bottom corner is the saddle over which the attack had to be made on the 18th and 20th October. 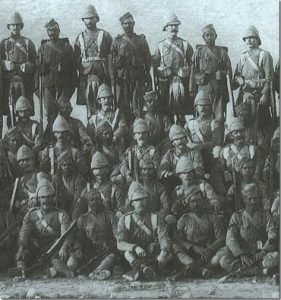 2nd Goorkhas and Gordon Highlanders in a group photograph after the battle.