Subedar Santbir Gurung of the 2nd Battalion, attached to the 1st Battalion, was awarded the Indian Order of Merit 3rd Class for conspicuous gallantry in the action at Tseri Kan Dao described above. At great personal risk he went with two or three sepoys to the assistance of Surgeon-Captain Selby who was in serious danger while tending a wounded man. Santbir himself seized the wounded man’s rifle and helped to keep off the enemy. Santbir was later Subedar-Major and King’s Orderly Officer in 1910, and achieved fame for his vigil at the Lying in State of King Edward VII immortalised in Rudyard Kipling’s short story ’In the Presence‘. 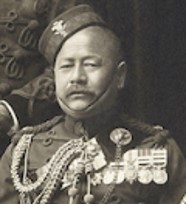