Second Lieutenant John Miller-Hallet, travelling to join the Regiment in India for the first time, survived when his ship, the RMS Persia, was torpedoed south of Crete by the German submarine U-38.  Among other passengers who survived were Lord Montagu of Beaulieu and his mistress Eleanor Thornton, the model for the Rolls Royce mascot ‘Spirit of Ecstasy’, but hundreds of others perished.  The ship’s cargo included a great deal of gold and many jewels belonging to Maharaja Sir Jagatjit Singh of Kapurthala, who had disembarked at Marseilles.  Miller-Hallet, whose nickname was ‘Twank’, went on to have a distinguished Army career and retired as a Lieutenant Colonel in 1946. 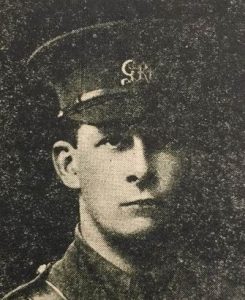 Miller-Hallet as an Officer Cadet at Sandhurst