Major Cyril Newall 2nd Goorkhas, attached to the Royal Flying Corps, was awarded the Albert Medal (precursor to the George Cross) in France. With 3 other men he risked his life to put out a fire in a large store of aircraft bombs. He later rose through the ranks of the RAF to become Marshal of the Royal Air Force Cyril Louis Norton Newall, 1st Baron Newall GCB OM GCMG CBE AM and the Governor General of New Zealand from 1941-1946. 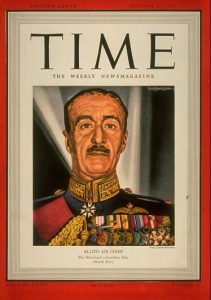 Newall, as Chief of the Air Staff, on the cover of Time magazine in 1939.  He lost Beaverbrook’s and Churchill’s confidence and was replaced after the Battle of Britain in 1940 by Sir Charles Portal.