The 1st Battalion, part of the 37th Indian Brigade in Mesopotamia, took part in a Corps attack on the the Turks at Dujailah Redoubt prior to further operations to try and relieve the besieged British 6th Division at Kut El Amara. The attack was unsuccessful, mainly because senior commanders did not exploit opportunities to advance and occupy the lightly-held objectives, allowing the Turks to reinforce.  These failures ultimately led to the dismissal of the Corps Commander, Lieutenant General Sir Fenton Aylmer, although some of the blame also lay with his subordinates.  The British incurred over 4000 casualties: the 1st Battalion had 96 killed and 108 wounded. Rifleman Padam Sing Gurung was awarded the Indian Order of Merit and several others received recognition for acts of gallantry.  Click here to read a more detailed account of the battle. 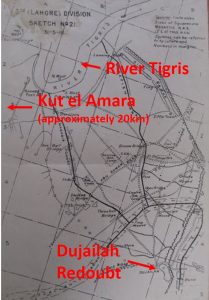 1916 sketch map of the area in which the battle took place produced by 3rd (Lahore) Division, of which the 1st Battalion was part.