The 1st Battalion, part of the 37th Indian Brigade in Mesopotamia, led an assault on a Turkish position known as The Liquorice Factory on the south bank of the River Tigris, but met with fierce resistance before seizing the objective on 3rd February after 2 days’ fighting. Battalion casualties were substantial: from an initial force of 545 all ranks three British officers, two Gurkha officers and 82 Other Ranks were killed; two British Officers, five Gurkha Officers and 197 Other Ranks were wounded. The Brigade Commander, Brigadier Carey, wrote: ‘I consider 1/2nd Goorkhas to have particularly distinguished itself in recent operations….they attacked with the greatest gallantry and determination’. 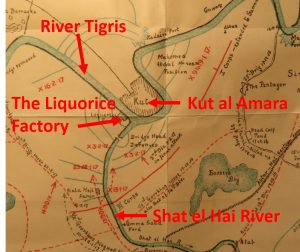 Map from the Regimental History showing location of ‘The Liquorice Factory’ near Kut al Amara.