The 1st Battalion, commanded by Lieutenant Colonel EH Sweet, and part of 37th Indian Brigade under Brigadier General Maclaclan, was ordered to occupy its previous defensive positions at Kardarra against possible attack by the Turks. 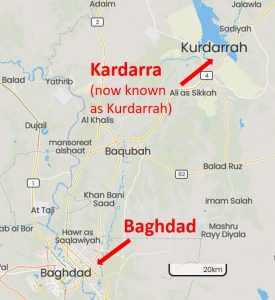 Map showing the location of Kardarra, now known as Kurdarrah.  Note that the topography of the area has greatly changed in the last 100 years because of the creation of the man-made Lake Hamrin in 1981.  The Kardarra River, which in 1918 formed a significant defensive barrier, was subsumed into it.