The 1st Battalion began its deployment from Kizil Rabat in Mesopotamia across the border into Persia with the task of securing the route east between Peitak and Kerind from the warring Sinjabi tribe. This was the precursor to a deeper penetration into Persia that ended on the borders of the Caspian Sea. A detachment of 2 rifle companies (3 British Officers, 6 Gurkha Officers, 592 rank and file, 23 civilian followers plus 8 Lewis machine guns) under the command of Captain McCleverty was transported in an ‘imposing procession’ consisting of 68 Ford vans, 200 Ford cars and assorted vans and light lorries of the Mechanical Transport Corps.  On arrival they joined a Moveable Column commanded by Lieutenant Colonel Claud Matthews of the 1/4th Hampshire Regiment. 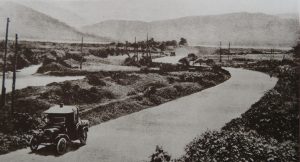 In the middle distance is the ‘Goorkha Post’ occupied later in the campaign, near Imam Zadeh Hachem, an area where much fighting took place.  The car bottom left is of a type used in the 6th June 1918 convoy. 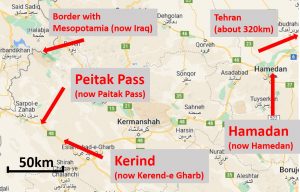