In the city of Resht, in Persia, the Jangalis, rebelling against the monarchist rule of the Qajar central government, surrounded the British Consulate which was being guarded by men of the 1st Battalion. A force commanded by Captain McCleverty consisting of 45 men from the 1st Battalion, 35 from 1/4th Hampshire Regiment and a single light armoured car succeeded in reaching the Consulate, which had been set on fire. A fierce hand-to-hand fight resulted in 4 Gurkhas being killed and 13 wounded, but the enemy incurred much heavier casualties. 3 days later McCleverty’s force had driven out any remaining Jangalis from other buildings in Resht and their leader, Kuchik Khan, withdrew his forces from the area. 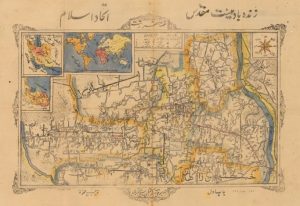 A 1918 map of Resht made by Ali Asghar Kermanshahi, the Principal of the Firdausi School, for the Jangali movement.  The inscription at the top reads ‘Long Live the Islamic Unity’, a slogan of the Jangalis.  Note the 3 insert maps top left, showing the world, Persia and the region.  The map is thought to have been used by Captain McCleverty, as a route to the Consulate is marked in red pencil in the bottom right segment.  (From the collection of Major General Sir Charles Vere Ferrers Townshend).