A small column, commanded by Captain Osborne of the 1st Battalion and consisting of a weak squadron of the 14th Hussars, a platoon of the 1/4th Hampshire Regiment, a platoon of the 1st Battalion and 120 Persian levies, was ordered to carry out reconnaissance work towards Tabriz. On this day they were attacked as they approached the town by 2000 Turks of whom 400 were mounted, and were driven back to Tegmidash. Captain McCleverty with his force of two rifle companies reinforced the column and he assumed overall command. The 120 Persian levies ‘proved to be useless and bolted as soon as the firing began’. Orders were given for the column to withdraw through Miane to a new position 50km back on the Kuh mountain range. The enemy continued to harass them for at least 20km. 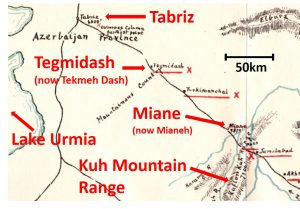 Sketch map from the Regimental History, annotated with the places mentioned