The 1st Battalion in Persia received news that after four years campaigning, the Turkish Army in Mesopotamia had collapsed and an armistice had been signed. The Battalion’s casualty list from May 16th 1916 to the end of 1918 totalled 642: British Officers: eight killed, 13 wounded; Gurkha Officers: four killed, eight wounded, one missing; Gurkha Other Ranks: 186 killed, 414 wounded, 42 missing.  Click here for an account of the campaign. 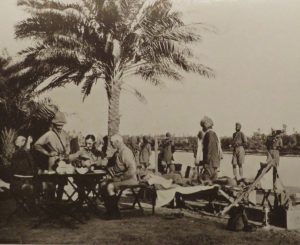 Officers of the 2nd Goorkhas having breakfast on the banks of the River Tigris.