At 11am on this day the guns on the Western Front fell silent as the Armistice took effect and the First World War officially came to a close.  However, all three of the 2nd Goorkhas’ Battalions remained on active service: the 1st Battalion defending Persia against Russian Bolsheviks after operations against the Turks had come to an end; the 2nd Battalion spread out in detachments on the North-West Frontier of India; and the 3rd Battalion on internal security duties in Peshawar.  They were to remain on active service in these places until well into 1920, and the 1st Battalion would not return to Dehra Dun until June 1921.  Regimental casualties 1914-1918 in all theatres had been 411 killed, 860 wounded and 135 missing.  A further 17 were to die and 23 be wounded by the end of 1920. 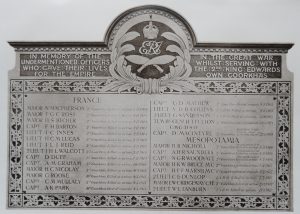