The 1st Battalion, based at the Caspian Sea port of Enzeli, reported in its War Diary: ‘The Bolshevik fleet was manoeuvering about 4-7 miles out and at about 0900hrs four boats came to within about 400m of the short when they were fired on with Lewis and machine guns. No 9 Platoon left at 1010hrs and although it succeeded in stopping a landing at Verst 10 by Lewis gun fire, it appeared that the Bolsheviks had succeeded in getting ashore near Verst 13.’ The Battalion was ordered to withdraw to Resht and in June moved to Menzil to prepare defensive positions against the Bolsheviks’ advance. 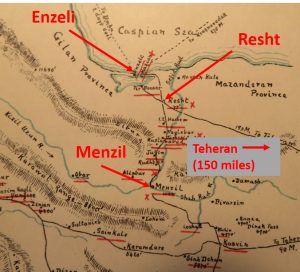 Sketch map from the Regimental History showing the area south of the Caspian Sea where the 1st Battalion operated and the places mentioned.