Two platoons of the 1st Battalion under command of Subedar Tilbit Thapa attacked a large hostile gathering of Bolsheviks at Jamshidabad about 30kms from the shore of the Caspian Sea. Aided by a troop of the Guides they routed the enemy, killing 60 out of 90 and capturing 27 prisoners plus a Lewis gun. Subedar Tilbit was awarded the Indian Order of Merit (2nd Class). This was to be the Battalion’s final action in Persia where under the terms of an 1919 Anglo-Persian ‘Agreement’ (not ratified by the Persians and therefore in effect a British ultimatum) they had helped defend the country and its oil against Russian Bolshevik incursion. 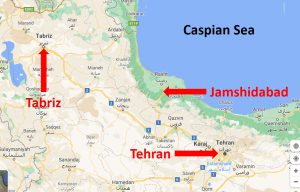 Map showing the location of Jamshidabad