In a shocking accident in North Africa, 68 men of the 1st Battalion were killed and 85 wounded when a mine demonstration went tragically wrong and the mine exploded. This was many more than were killed or wounded in any subsequent action against the enemy. 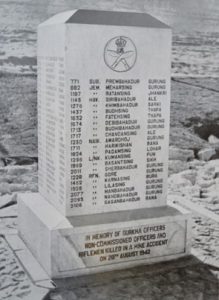 The memorial in the photograph, set up at the time, no longer exits but all the names are recorded on the Commonwealth War Graves Commission Alamein Cremation Memorial, which is a separate part of the main El Alamein War Cemetery.  It commemorates approximately 600 men of the British Forces who were cremated in Egypt and Libya according to their religion.