General Wavell, Commander-in-Chief India, inspected 77th Indian Infantry Brigade, the formation that formed the first Chindit Expedition and included the 3rd Battalion of the 2nd Goorkhas. The Brigade was organised in 8 columns, Columns 1-4 being loosely based on A/B/C/D Companies of the 3rd Battalion with the addition to each column of a mule company, a sabotage detachment of Commandos, a platoon of the Burma Rifles and RAF and Signals detachments. 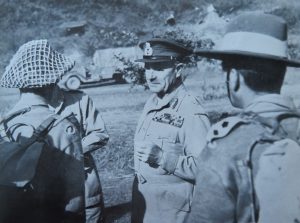 General Wavell inspecting the 3rd Battalion at Imphal, 6th February 1943 (photo from the Regimental History).  Lieutenant Colonel L A Alexander, the Commandant of the 3rd Battalion, is on the right of the picture.