Number Two Column of the 1st Chindit Expedition, loosely based on B Company of the 3rd Battalion commanded by Major Arthur Emmett, had been tasked with destroying the railway junction at Kyaiktin as part of the deception plan to distract the enemy from the main Chindit force operating further north.  On the night of 28th February/1st March they bivouacked near Yindaik, the terminus on the river Mu of the narrow-gauge railway which ran west from Kyaiktin. 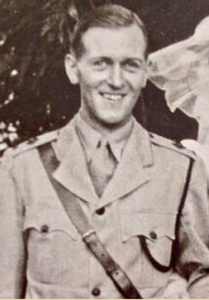 Major Arthur Emmett, who served with the 3rd Battalion 1941-1944 and returned to his civilian life as a tea planter in Bengal in 1946.