Lieutenant Charles Bruce commanded the Burma Rifles platoon of No 2 Column of the Chindits, based on B Company of the 3rd Battalion. While the Column prepared to attack Kyaikthin railway station he had been sent ahead to reconnoitre crossing points on the River Irrawaddy. According to Major Bernard Fergusson, Commander of No 5 Column, in his book ‘Beyond the Chindwin’: ‘Charlie Bruce seized a village on the river with six men and held it for six days, disarming the local police, dispatching a boatload of Japanese with tommy guns and giving a remarkable propaganda speech. He had just said “I can call great air forces from India at will” and thrown his arms over his head in a theatrical gesture when much to his surprise six British bombers flew over towards Mandalay. Improvising brilliantly, he said “What did I tell you?”. From then on he was a made man.’ He was awarded a Military Cross for his work on the first Chindit expedition and a bar to it for his work on the second. 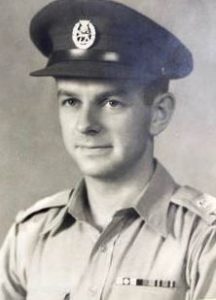 Charles Bruce (later in the war, as a Major in the York and Lancaster Regiment)