The 3rd Battalion launched a successful attack on Snowdon East, near Tamandu in Ann Township, Burma. In this very fiercely-fought action which resulted in 100 casualties, Rifleman Bhanbhagta Gurung of B Company won the Victoria Cross. (Click here for a fuller account of how he won this and here for a more detailed account of the battle). There were 10 other gallantry awards for this action including the IDSM for Naik Tule Ale, later the Gurkha Major of the 2nd Battalion in 1971. Thereafter the 5th March was celebrated annually as ‘Tamandu Day’ in the 2nd Goorkhas, and it is now one of the battle honours recognised in company names in the Royal Gurkha Rifles. 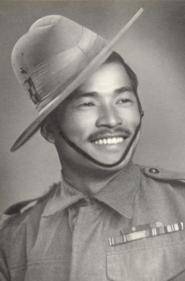