The 1st Battalion embarked in Salonika on HMT Carthage after completing their duties in Greece, arriving in Karachi on 7 February and reaching their home base in Dehra Dun on 10 February. The Battalion had been away on active service since 18 July 1941, a period of 3 years and six months.  They had previously been on operations on the North-West Frontier for nearly 3 years in 1937-1940.  They had lost 322 all ranks during the Second World War. 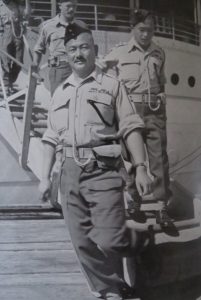