The 3rd Battalion was disbanded and reconstituted with the survivors of the 2nd Battalion, recently liberated from several years in Japanese captivity, at Santa Cruz, Bombay, at midnight to form a new 2nd Battalion of the Regiment. The Commandant was Lieutenant Colonel Leslie Evans, who had been a prisoner of war. 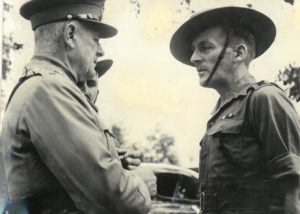 Leslie Evans (R) as a Major, shortly after returning to Dehra Dun from Japanese captivity in September 1945, talking to Field Marshal Lord Wavell, then Viceroy of India.