The 4th Battalion of the 2nd Goorkhas became 5th Battalion 8th Gurkha Rifles (5/8GR) part of the new Indian Army, on the partition of India. The Battalion remains part of the Indian Army order of battle and proud of its historical association with the Sirmoor Rifles, keeping many of the latter’s traditions and distinctions of dress. 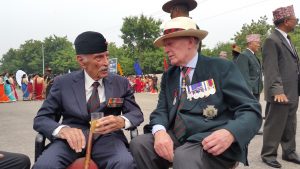 Links between the British Gurkhas and 5/8GR remain in place.  This picture shows Lieutenant General HC Dutta, a former officer of 5/8GR and later an Indian Army Commander, and Lieutenant General Sir Peter Duffell, a former officer of the 2nd Goorkhas and President of the Sirmoor Rifles Association, at the 75th Anniversary of 5/8GR in Hyderabad in 2017.