The Queen’s Truncheon, accompanied by a party of British and Gurkha officers led by Major D Spain, took part in the Coronation Ceremony of Her Majesty Queen Elizabeth II in London. 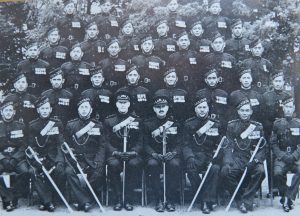 The 2GR Coronation Contingent.  Major Spain is in the centre of the front row (with the moustache).