The King and Queen of Nepal visited the 1st Battalion at Norwegian Farm Camp (later Cassino Lines) in Hong Kong. This was the first occasion the Nepalese sovereign had visited a Gurkha unit in the British Army.  Later in the year Major Gordon MacDonald took a contingent consisting of the Regimental Band and a composite company of men from all Regiments to provide a Gurkha presence in the UK during the King and Queen’s visit there.  The contingent was reviewed at Buckingham Palace and Major MacDonald was awarded the Order of Gorkha Dakshin Bahu for his services. 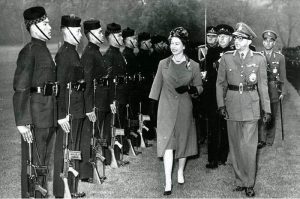 The Queen and King Mahendra inspecting the composite company of Gurkhas at Buckingham Palace.  Major MacDonald is immediately behind the King, with drawn sword.  Behind him is Field Marshal Slim.