C Company of the 2nd Battalion, returning from 5 days in an unsprung ambush in Borneo, were themselves ambushed. 2 of the Goorkhas were killed and 2 seriously wounded but the Indonesians also lost 2 men and in the face of determined counter-attacks from C Company withdrew across the border. The Company Commander, Major Aslett, was awarded the Military Cross for this and several other successful operations, and Lance Corporal Amarjit Pun was awarded the Military Medal.  Click here to read an account of the campaign. 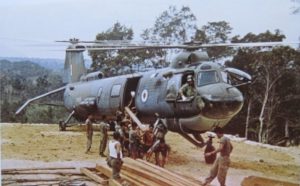 A Belvedere helicopter at a 2nd Goorkhas base in Borneo