In Borneo, B Company of the 2nd Battalion fired at an enemy camp at long distance with machine guns and artillery. Based on the reports of local people, up to 24 Indonesians were thought to have been killed. It is believed to have been the last occasion on which the Vickers Medium Machine Gun, which had a long and distinguished service, was used offensively although it continued to be used in defensive positions for some time. 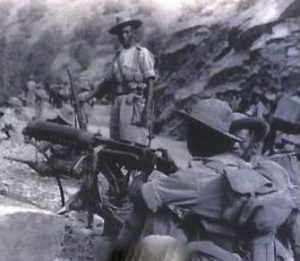 Rifleman Harkaraj Gurung of the 3rd Battalion (facing the camera) and a Vickers Medium Machine Gun being used during the Chindit Expedition in Burma, 1943