A platoon of C Company 1st Battalion on operations in Borneo were surrounded by a large force of enemy commandos. They had no artillery or mortar support and no helicopters were available to bring reinforcements, although these did eventually arrive. A lone RAF Javelin flew low over the Indonesians but could not engage them with guns or rockets because they and the Goorkhas were too close to each other on the ground. However, by firing its afterburners the pilot convinced them it was dropping bombs. The bluff worked! 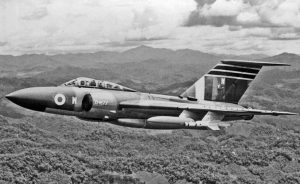 A Royal Air Force Javelin of 60 Squadron, based in Singapore, over the Borneo jungle.