Her Royal Highness Princess Alexandra unveiled the stained glass window in the Indian Army Room at the Royal Military Academy, Sandhurst, commemorating the 2nd Goorkhas 150 years of service from 1815 to 1965. The window was designed and made by Mr Lawrence Lee who had already designed several windows for the Academy chapel. 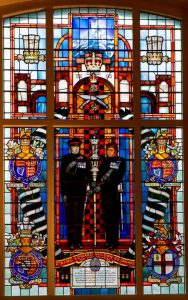 The window in the Indian Army Memorial Room, Sandhurst

The models for the two figures were Major (later Lieutenant Colonel) Digby Willoughby MC and Major (QGO) Partapsing Gurung, MVO, both of the 1st Battalion.  Colonel Denis Wood, who was responsible for organising the event, recalled: “Princess Alexandra’s Lady in Waiting was Lady Mary Fitz-Alan Howard, one of the four daughters of the Duke of Norfolk. Her shoes were killing her and she hid behind me in the corner opposite the window to take them off and stand stocking-footed”.