Honorary Captain Pirthilal Pun MBE MC died in Paklihawa, Nepal. He joined the 1st Battalion in 1933 and was commissioned in 1943 after only 10 years service, retiring from the Army in 1966. He fought with the 1st Battalion throughout the Second World War and was awarded the Military Cross at Monte Cassino. One of his Commanding Officers said ‘He was without doubt one of the finest men I have ever served with’. 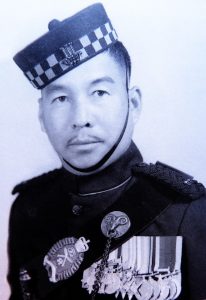