The Colonel In Chief, His Royal Highness the Prince of Wales, visited the Regiment for the first time. The visit, which lasted until 6th March, was based on Cassino Lines in Hong Kong and included a parade of both Battalions, demonstrations, a floodlit Sounding of Retreat and social events. At the attestation parade for new recruits the Queen’s Truncheon was held by the Regiment’s only surviving VC winner, Havildar Bhanbagta Gurung, who had been flown from Nepal for the occasion. 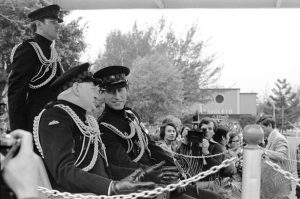