A 1st Battalion tour of duty on the Sino-Hong Kong border to capture illegal immigrants started with a minus score as a company clerk arriving at Sha Tau Kok without pencils, decided to go shopping for some and accidentally crossed the poorly-defined border.   Luckily the Hong Kong policeman who negotiated his repatriation was having a picnic at Shum Chun Reservoir with his Chinese opposite number and returned the clerk an hour and a half later. 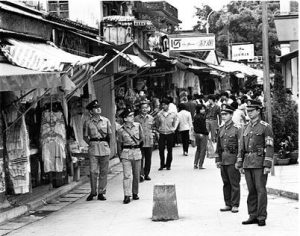 Chung Ying Street in Sha Tau Kok where the incident took place: Hong Kong (and Hong Kong Policemen) on the left; China (and Chinese Police) on the right; concrete border marker in the centre of the street.