A portrait of the Colonel in Chief, His Royal Highness Prince Charles, by the artist Michael Noakes, was unveiled in the presence of the Prince and Princess of Wales at a reception at the Ritz Hotel, London, attended by some 200 other guests.  In the picture His Royal Highness, who had recently been on trek in Nepal, is wearing a 2nd Goorkhas belt with a Regimental chequerboard band round his hat. Behind him is a typical Nepalese landscape and a well-known mountain in western Nepal, Macchapucchre.  The portrait now hangs in the Gurkha Museum, Winchester. 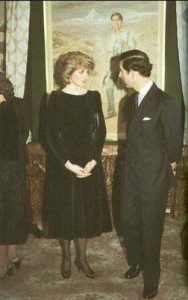 The Prince and Princess of Wales at the Ritz Hotel, London, on 8th February 1984, with the Noakes portrait behind them.