The Prince of Wales became King Charles III on the death of his mother, Her Majesty Queen Elizabeth II. He had been Colonel-in-Chief of the 2nd Goorkhas from 1977 until it merged with the other Gurkha Infantry Regiments in 1994, at which point he became Colonel-in-Chief of the merged Regiment, the Royal Gurkha Rifles. It was the first time the Regiment had had a reigning sovereign as Colonel-in-Chief since King George V died on 20 January 1936. 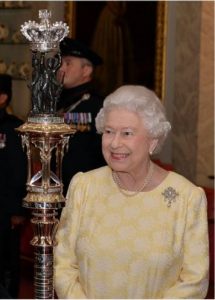 Her Majesty the Queen viewing the Queen’s Truncheon in 2015