‘On This Day’ reported that on the 24th March 1981, a 1st Battalion clerk based at Sha Tau Kok went to buy some pencils in Ching Ying Street (see photo) and accidentally strayed over the border and was detained by the Chinese Police. It reminded Brigadier Bruce Jackman of a similar incident in the 2nd Battalion, again at Sha Tau Kok, in August 1979. At the time clerks, cooks, and other HQ Company personnel were being sent to the border nightly to relieve men in the rifle companies so the latter could go home and see their families or simply have a night off from the gruelling routine of ambushes to capture illegal immigrants. A recently-joined young clerk had just completed his first ambush patrol during which it had rained all night and he was soaked through. While awaiting transport back to the Battalion Lines he wandered off to buy himself a fresh, dry pair of underpants but accidentally crossed the poorly-defined Sino-Hong Kong border in Ching Ying Street and found himself apprehended by the local militia (as opposed to the People’s Liberation Army, which would have made the situation more serious and difficult to resolve). Bruce Jackman takes up the tale:

Carol and I were hosting a rather ‘duty’ curry lunch at home entertaining the Commander Gurkha Field Force, Brigadier Ian Christie, and some of his staff when my orderly came in and announced ’Telephone ayo saheb!’. When I asked who it was he said ‘OC B Coy, saheb’! Whereupon I knew it must be bad because you [John Harrop] wouldn’t have otherwise troubled me on a Sunday. After you had briefed me I told Christie who went white. We had an impromptu O Group there and then and his COS rushed off in his car to ‘Stand To’ the HQ for a major Border incident. Rapid phone calls were made to the CBF, HK Governor, and MOD. I did indeed receive instructions down the same chain via Ian Christie to play things down and keep the incident ‘low key’. The meeting between both sides astride the border in the middle of the Cha Ta Kok main street was arranged for the next day. It took a bit of negotiating by the RHKP to agree the composition of each side eventually, if my memory serves, they had representation from the PLA, the local militia, and the area politburo which we matched as best we could. As you say I had difficulty controlling myself when I was introduced to their head honcho, the area Politburo chief, at the end of their line whose name was Mr Lo Ki, an impressive tall Chinese in his high-collar Mao style jacket. I was very careful to stress that the incident had been ‘due to a misunderstanding’ – not suggesting whose misunderstanding so as to save face all round. However, when this was accepted I took the bull by the horns, so to speak, and explained, through the police interpreter, the English meaning of the term ‘low key’ to Mr Lo Ki. Fortunately he also saw the funny side of it and the otherwise rather tense incident was over with diplomatic smiles on both sides! Not a shot fired – unlike 10GR! 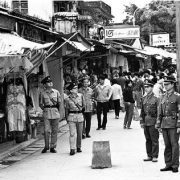