Malleteers of the Sirmoor Rifles once again adorned the hallowed lawns of Hurlingham this Summer – and I do not overstate the sartorial elegance of the occasion. On the opening day of the ‘Sirmoor Season’ in late July Hurlingham Members on an adjacent lawn informed Mark Pettigrew that seldom had such a distinguished and elegant quartet been seen on the lawns of the Club. The ‘quartet’ being Mark, Peter and Annie Duffell and David Santa-Ollala! The ‘Quartet’ were joined on the day by Sophie Graham, Kinny and Mimi Evans and Christopher Lavender – and later – after a good luncheon in the Caledonian Club – by David and Joanna Thomas.

After the two ‘heatwave days’ earlier in the week the cooler temperatures at the end of the week were welcome. We had opted to play Golf Croquet – as the more social of the two codes (the other option being the significantly more ‘Machiavellian’ Association Croquet). Kinny and Mimi adapted seamlessly from village croquet to the pristine lawns, and David Santa-Ollala displayed his accuracy with mallet and ball – with skills mastered in an earlier cricketing career. Peter was precise in the positioning of his ball before the hoops – although it proved an attractive target for his fellow Malleteers – while Annie continued to run the hoops with graceful ease. David Thomas made his mark on Lawn 6 as the afternoon drew to a close – with typical aplomb and gravitas, while Joanna encouraged Mimi and Christopher on Lawn 4 in their closely contested match with Peter and Annie – during which Mimi ran two hoops from ridiculous angles.

We ‘took tea’ shortly after Jo Santa-Ollala had arrived and then wended or way home – some as far as distant Wiltshire! 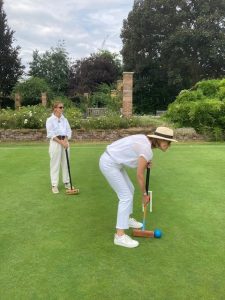 Sophie lines up the next hoop 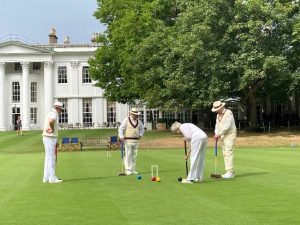 Annie runs one of many hoops – with admirers looking on. 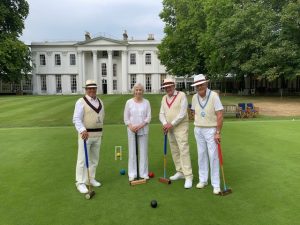 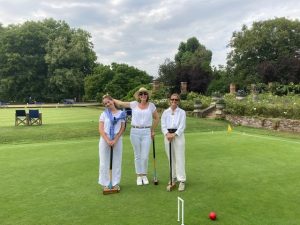 Mimi, Sophie and Kinny – adding their own elegance! 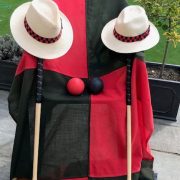 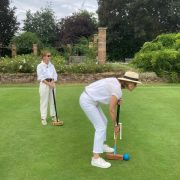 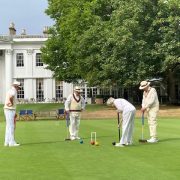 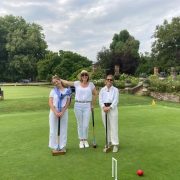 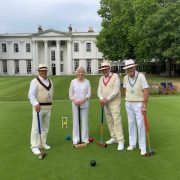